Are E bikes any good? 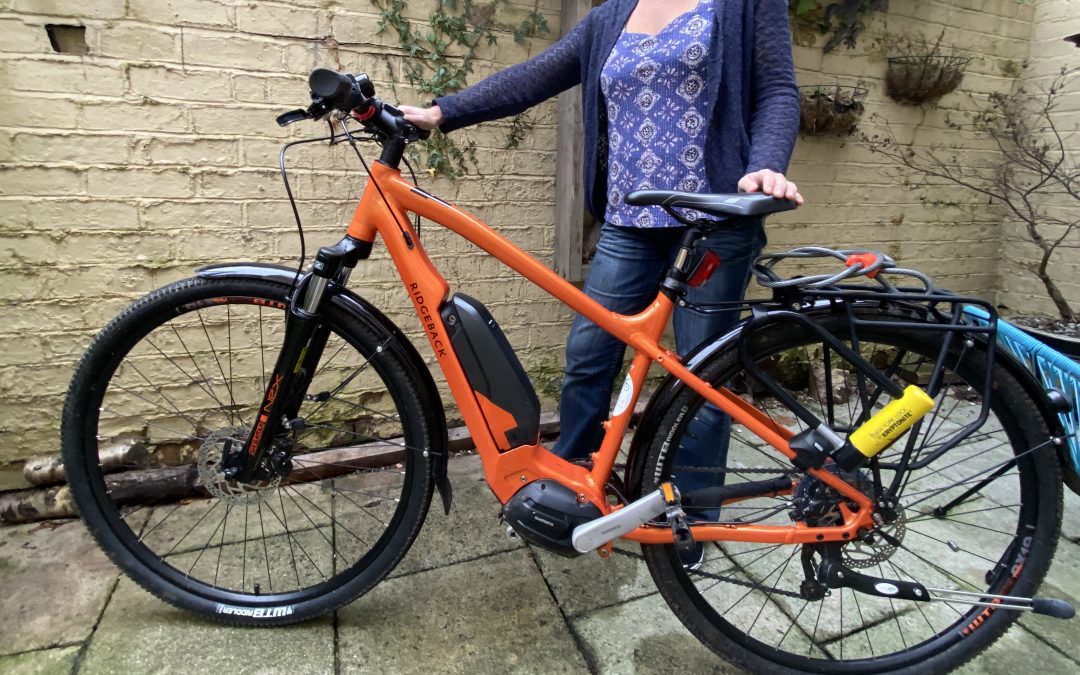 To answer this question we asked Gigi Mingstones to tell us what she thought.

So an e-bike…no longer needing to do school runs on the way to work, really feeling the need to get fitter, wanting to use our beast (VW campervan and only vehicle) less, thereby being more environmentally friendly and saving money in the process.

BUT why not just get an ordinary bike?

I must admit to feeling a bit of an exercise cheat when I thought about getting an e-bike, that is until I tried my cousin’s in the summer. She lives in the Hautes Alpes, often used in the Tour de France, for obvious reasons. I have to say my little 20 minute jaunt was enough to convince me that an e-bike was definitely the way to go for me. I stayed on the lowest assistance level to go uphill and still felt like I was getting exercise without wanting to give up and walk. My cousin then took me off road on a very rocky path, which I would not have normally attempted and would probably have stopped because I wouldn’t have managed to keep peddling! It was a real sense of achievement that I could climb up such a rocky path without stopping. All of this was using just the lowest assistance.

I guess I have a bit of a lazy streak and do need that little push to motivate me to exercise sometimes and psychologically the e-bike gives me that boost. Using my cousin’s bike made me see that I could still get the exercise with the extra support if I needed it and whilst actually enjoying the experience!

If you’re not really knowledgeable about bikes like me, you might be imagining, like I did initially, that an e-bike was more like a moped, the French type that look a bit like a bike. This is NOT an e-bike. This is an e-bike!

I have been lucky enough to get the use of an e-bike from Bike4Health. And what a beauty it is. The colour by the way is a shiny burnt orange – lush.

I suppose I hadn’t really thought about it, but it didn’t cross my mind that an e-bike would still have gears like an ordinary bike, giving you the option to use it with or without assistance.

It has 3 assistance levels: eco, normal and high and a screen that allows you to see the time, distance and other stuff I haven’t even investigated yet.

Switching between modes and other functions is at the press of a button.

It also has a very useful stand and it does have front suspension, which Mick (husband and keen cyclist who loves a hill) has shown me how to turn on and off.

My first try was on a cold, blustery, winter day. Just sitting on the bike, it felt comfortable. I only went round the block in eco mode, but I could immediately feel the power kick in. Switching it into high mode was like turning on the turbos. Boy do you notice the difference! Can’t wait to try it on some proper hills! Even without power assistance, the bike felt comfortable and smooth to ride. Just like a normal bike!

Stopping to let Mick have a go, I found the stand very useful. The bike is quite heavy so having a stand to support the bike whilst you fiddle with gloves, locks etc… is really handy. Even Mick who, before trying the bike thought the stand was not necessary, changed his mind.

So what did the cyclist think? Actually he was really quite impressed with the power and comfort of the bike. In fact this week he has used it more than me. Mick cycles or runs to work, but having just spent the week suffering from a bad back, I offered him the use of the bike. I’m a bit worried that I might never get it back – he’s that impressed with it and that is coming from someone who loves to push himself to the limit and would never usually take an easy exercise option.

I did use it to go to the gym. I always feel a bit guilty going to the gym by car I have tried running there and even biking on a normal bike, but the mental block was always there and 98% of the time I took the car. I have to say I don’t feel that same mental block when I think about going on the e-bike. I wasn’t initially sure I could feel the power on the way to the gym, but it felt easy enough to ride and felt good to be getting to the gym under my own steam. Cycling back home, a good portion of my route is downhill with the exception of one long hill on the final stretch. After a 45 minute workout I was looking forward to seeing if the bike would help get up the hill without regretting the choice to cycle. I stayed in eco mode and I have to say the bike did not disappoint – so much so that I am looking forward to my next visit to the gym by bike!

I am looking forward to using it out and about next week and seeing if I use it to go to work.

Thanks Gigi. We look forward to the next update. You can read other riders opinions on the bike on Facebook.